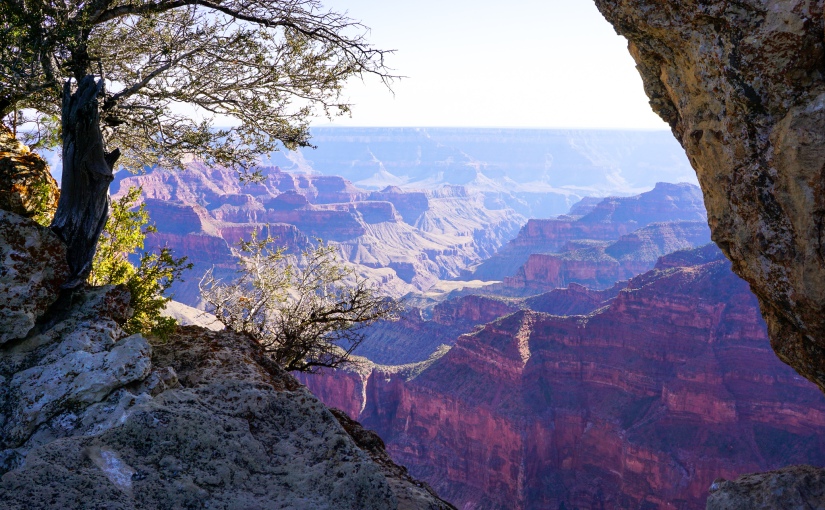 Today was our main event! We were planning on hitting 2 major view points in Arizona, Horseshoe Bend and Grand Canyon. The last time I visit this area was 4 years ago and at that time, we were only able to drive by Horseshoe Bend so this was my first time actually visiting. I was super excited for it.

Before heading out, we made samgak kimbap (triangular kimbap) for lunch/dinner/snack. It was our first time making it but it wasn’t too hard. We made Tuna-Mayo gimbap and kept it cool in the ice box. We weren’t sure what time we might arrive at Grand Canyon so we made sure to take enough food and drinks with us.

Our first stop was Horseshoe bend. There were several changes since 3 years ago! They now had a paid parking lot with a gate and had a $10 per vehicle entry fee. And the trail down to the overlook was all new as well. Before, there was no actual trail but a sandy path that people took. The new trail was great, with a few stopping points, as well as, semi-fenced path. The path itself took longer than before since it wrapped around but it felt more safer. This was also pet-friendly area as I saw several dogs on the trail, all leashed.

Once we got to the edge, I noticed that they fenced off the main area, making the place safer for families with children. There were several spaces, left and right, that did not have the fence and people were sitting on the edge, all enjoying the view. And I don’t blame them! It was beautiful.

We visited in the morning but I would recommend visiting during the afternoon to avoid the shadows shown in the picture. However, it was still amazing to see it in person. Just watching the boats go by and enjoying the sun and wind made things very serene. The horizontal line that split the canyon and the sky, the view of the river… I definitely could have just sat here for hours.

Also, visiting at 10am, there wasn’t a lot of people at the Bend. We were able to take pictures without people in it and enjoy the scene quietly. I cannot say for sure how busy the afternoon gets. But my guess is that it will be slightly more busy to see the Bend without the shadows.

After taking in the scene, we headed out to Grand Canyon North rim. This was my first time going to the North rim so I was super excited to see the difference. Everyone told me that they enjoyed the South rim more but I wanted to see it with my own eyes. On the way to Grand Canyon, we passed by the Paria Canyon-Vermilion Cliffs wilderness area. Only if we had won the lottery. I will have to try again next time 🙂

The drive to Grand Canyon was longer than expected but quite surprising. We were driving through the desert one moment and next, we were passing through a forest! There were so many trees! We rolled down our windows and enjoyed the cool, fresh air. Also, from the welcome sign and entrance booth, the canyon was another 30-40 minute drive! Due to Covid, they were not accepting cash/credit card at the booth. You had to purchase the pass from their website. The park ranger handed us a map with the website’s QR code.

We didn’t have a lot of time to explore the rim but we wanted to do at least do one trail. And there must have been several people who visited the Rim with the same idea because they had a sign for it!

We decided to do the shortest one so we can have lots of time for photos and it was the right choice. Once we were on the Bright Angel Point trail, every few steps, we ended up stopping and taking photos because it was just breathtaking. The depth, the colors, the ridges… it was all just amazing.

I really loved seeing all the red shades! Just wow. Just these simple glimpse were enough to make the trip worth it. The North rim had its own kind of beauty and I would not compare it to the South rim. However, personally, I think I prefer the North rim. Getting here is troublesome but the view really took my heart away.

We had to walk a bit more to reach the end of the trail. The trail itself is not hard but there are small ups and downs. Several area did not have railings and were a bit narrow as well. But the view at the end made it all worth the walk.

The camera does not do it justice! The 360 view of the Canyon was amazing. Plus, when we got to the end, there were only a handful of people. Most of them were wearing masks and just taking pictures. We ended up doing the same. It was amazing to see the red and the green together. We both stood here in awe for a few moments.

After taking in the view, we headed back to the parking lot and found a picnic area to eat our packed lunch. And the view from the picnic area was amazing too. We were able to eat while enjoying the Canyon and the fresh air! The openness really made my cabin fever go away.

On our way out, we saw some buffalo and deer. The cars in front of us stopped and for a moment, we didn’t know why. We only noticed when people started to get out of their cars to take photos. It was pretty cool. We didn’t want to disturb them so we drove off slowly. The sun started to set as we got out of the forest area and the way the sunset light was beaming on the canyon was something that just made us pull over.

Just looking at this, I was mesmerized. I started to wonder what the sunset would be like at the Grand Canyon North rim and told myself that next time, I will try to spend a night at the rim. Once the sun started to set, the light was gone quick! We ended up arriving at our hotel in the dark! But we both agreed that it was all worth it.

We took a break and rested a bit before heading out again. This time, to see the stars! I love stargazing and it is definitely better in the dark. We left the hotel around 11pm and drove into the darkness. And while driving out, we were able to see stars brightly shining in the sky. It was just amazing. We parked safely and viewed the stars. Because we were on the road, we had cars go by but only a few and it didn’t bother us. We were able to see the Milky Way with our naked eyes and it came out even more clearly in the photos. What a great way to end the night!